Disruptive Analysis has recently published an update of its June 2014 report on "Non-Neutral Mobile Broadband: New Models for Monetisation"

It updates and extends the model for mobile data revenues worldwide, for both traditional and new forms of charging. It also analyses the impact of the Apple SIM, mobile data encryption (including SPDY), zero-rating, paid-peering, new vendors and other recent developments in regulation.

The baseline forecast for global mobile Internet access is $354bn by 2019. New business models such as "sponsored data" or "paid priority QoS" might add another $19bn incremental revenue - but may well cost more than that to enable, deploy and market. The report analyses more than 15 different policy use-cases, such as sponsored advertising, single-app dataplans, enhanced MVNOs, and IoT-related QoS. 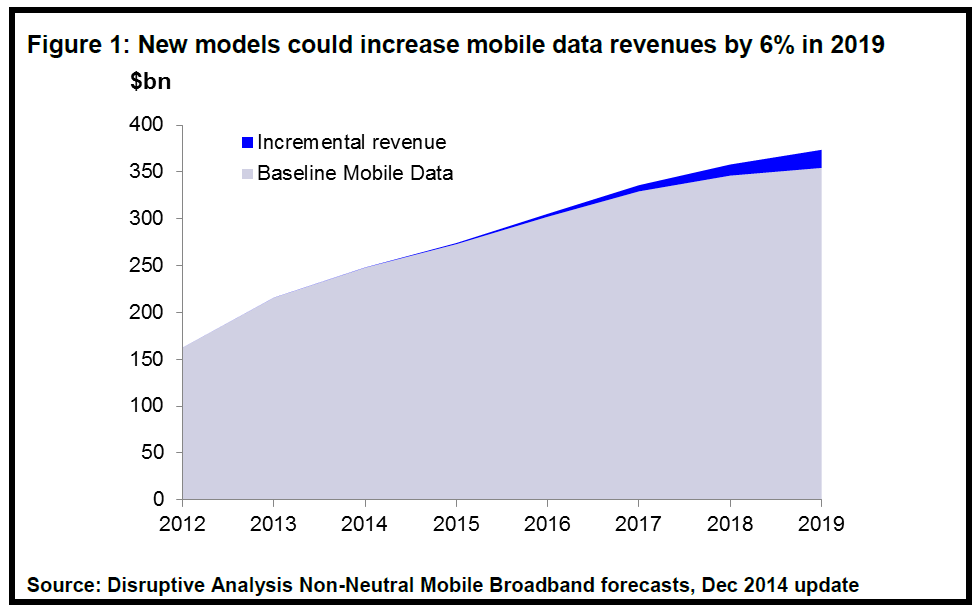 Despite developing markets having more lax rules on neutrality, the bulk of the "enhanced monetisation" opportunity (2/3rd) is in North America and Europe.

In other words, for mobile, all the arguments about Net Neutrality (or Non-Neutrality) are largely a waste of time and effort in terms of new revenues, justification of 4G/5G investments and so on. The telco industry's voluminous research papers and theoretical models, from assorted academics, economists and consultants, fail to understand the practicalities involved - technical, commercial alike. It's a set of straw-man arguments.

The concept of two-sided markets applied to mobile data traffic - whether "sponsored" by content companies, or "prioritised" using QoS, simply doesn't fly in the real world. The academics ignore the realities of mobile application development, behaviour & perception of users, role of WiFi, encryption (see below), recalcitrance by smartphone platform providers, lack of willingness-to-pay and ability-to-bill, and about a dozen other issues.

In a nutshell: If mobile operators can't justify investing in 4G and 5G on their current trajectories, then changing the law (or preventing Internet regulation) isn't going to help. There is very limited money in "application-based" business models - except (ironically) zero-rating of certain apps' traffic, which seems to encourage new sign-ups or switching, albeit without any extra revenue from the Internet companies. Some very low-end users are adopting restricted plans for single applications or a curated selection, but as a general rule "anybody who can afford the whole Internet will not be satisfied with just half of it". 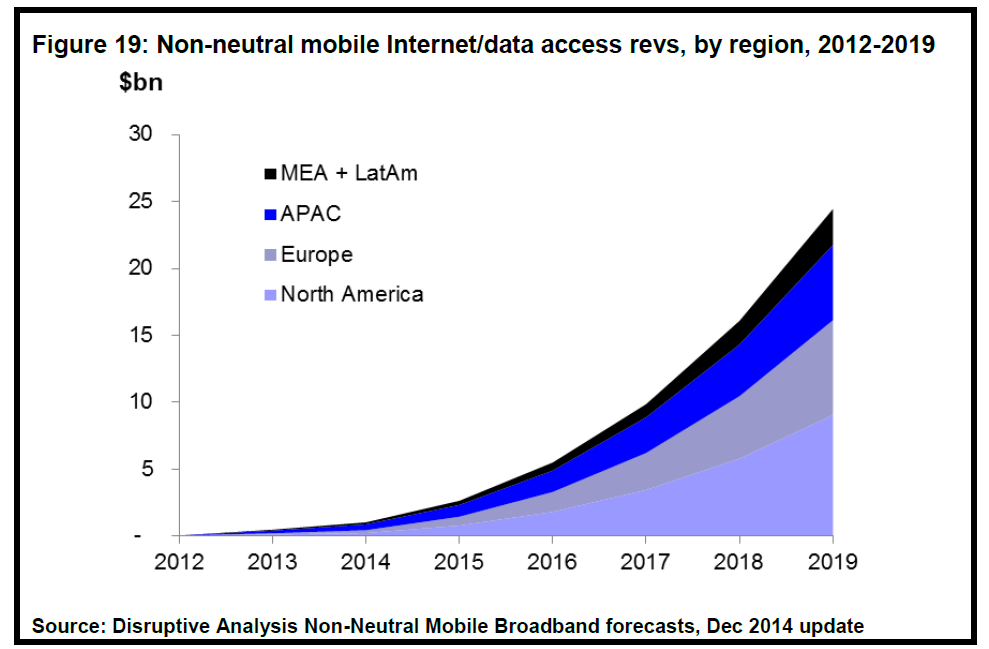 Mobile operators would be better off switching money away from lawyers and lobbyists, and towards genuine service innovation - or (as is actually happening) either consolidation, or just getting on with building networks and selling access with decent pricing and tiering, differentiating on coverage, speed, customer service, devices, bundled content and maybe time-of-day or location-specific plans.

The obsession with application-based charging models is mostly driven by DPI and policy vendors - there is very little (if any) demand from application and content players for prioritised QoS or sponsored data. This is critically important, as attempts to "non-consensually" filter or modify Internet traffic by application (blocking or "negative discrimination") are leading to a huge rise in encryption, also catalysed by surveillance fears.

Some mobile networks now have >50% encrypted data traffic, and that is inexorably rising as websites switch to HTTPS or (in future) SPDY or similar variants in default-encrypted HTTP2. The industry's attempts to halt the spread of crypto are likely to fail - the "Open Web Alliance" seems to be too little, too late, and over-focused on proxies which are intended to optimise telco intervention opportunities, rather than fix specific problems. The new report update gives a full analysis of where the encryption debate is likely to end up.

Report purchasers will get both the original full 150+ page 2014 report [details here] and also the new 35-page update document. Those buying the Corporate licence will also get a free one-hour conference call with Dean Bubley, the report's author, to discuss the findings in detail.


For online purchasers, the PDF document will be sent by email, typically within 24hrs of receipt of payment, although sometimes travel schedules may mean a small delay. Please include company name for licence purposes, and VAT number for EU purchasers.

NOTE: PAYPAL's CARD PAYMENT SYSTEM CAN BE TEMPERAMENTAL, IF USED IN A BROWSER ALREADY ASSOCIATED WITH PERSONAL PAYPAL ACCOUNTS, OR WITH SOME CORPORATE CARDS THAT CANNOT BE USED FOR OVERSEAS PURCHASES. PLEASE EMAIL INFORMATION at DISRUPTIVE-ANALYSIS dot COM IF YOU HAVE PROBLEMS

Enterprise technology often follows consumer trends. Currently, in the mainstream telecoms world, phone call and SMS usage is being eroded by competing and fragmented IP and app-based platforms – the so-called “OTT players”. Instead of using a handful of standardised (but expensive and limited) services, people are voting with their thumbs and using a wide range of communications apps and tools, on a case-by-case basis. They offer a mix of functionality, low/free cost and "coolness" - Whatsapp, Skype, Kik, LINE, WeChat, Viber, Hangouts, iMessage, Instagram, SnapChat and so on.

In business, an equivalent trend (or threat) is brewing. It manifests as communications dis-unifying, despite the industry buzzword suggesting "unified" platforms are the only path to the future. As well as standalone VoIP and conferencing systems, we are also seeing specific instances of enterprise communications being carved out of traditional, centralised UC/PBX platforms and integrated directly into cloud-based applications and business processes.

In addition, business users who have never before had a PBX "seat" or extension (eg the self-employed, or startups) are using sophisticated mobile or cloud-based apps to enhance their communications experience. They are also using IP-connected phones and tablets, rather than legacy circuit-based communications.

Some dis-unification has always been inevitable - we all get invited to other companies' conferencing systems, webinars or even messaging platforms. Many in the business community use their own personal mobile and home phones, Skype when travelling, send messages with personal webmail - or indeed using the tools built-into sites like LinkedIn and Twitter. New collaboration tools like Slack are currently getting a lot of attention as well. These tools have mostly been used for communication between companies, but a fair amount (especially BYOD calls and SMS) has been between colleagues internally as well.

The question is what happens in future to business communications.

Disruptive Analysis sees two possible paths:
Disruptive Analysis believes that both trends will happen simultaneously, in fact - but just in different contexts. And WebRTC will be a catalyst of both - allowing UC to address more devices and use-cases, but also allowing "DUC" to encroach from adjacent software domains. (Non-WebRTC approaches will also continue as well, but most will converge over time, such as Microsoft's Lync Web API and ORTC)

We already see UC systems being extended outwards - for example "guest access" enabled in Cisco Jabber, or federation from MS Lync. WebRTC will extend this trend further - already seen in early implementations like Unify's Circuit. Hosted UC platforms offered by telcos are also starting to embrace WebRTC - a trend that is likely to be embraced by most vendors and major operators during 2015.

As in consumer markets, a core part of WebRTC-extended business UC proposition is around interoperability and identities being “anchored” in central systems, with well-defined numbers and identity (and security). This certainly makes sense for industries and companies with strict compliance and call-recording needs, for example - and it seems likely that these capabilities will be integrated into line-of-business apps such as doctors' practice-management or banks' trading platforms.

Conversely, other contexts have counter-arguments that communications-as-a-feature works better as optimised “islands”, disconnected from traditional UC platforms. A putative video-interviewing service for recruitment, built into a site like LinkedIn, would probably have no relationship with E.164 phone numbers or single-enterprise IDs. Similarly, clunky phone-number dial-ins for conference calls and webinars will gradually fade out - probably replaced with email addresses or other log-on IDs.

The real battleground, however, will be future vertical applications for business, both internally-focused and for B2C/B2B interaction. There seems little reason for an oil-company's field maintenance application (which might incorporate video interaction for remote diagnosis of problems) to interface with the UC system used at head office - especially if it is cloud-based and used for multi-way conferences with partners and suppliers as well. A security application, which includes both physical guards as well as CCTV cameras, would also likely be standalone.


The choice of communications components would up to the app developers, who may well choose a WebRTC platform provider, and look to support a broad range of endpoints, both with and without telephony capabilities. B2C interaction platforms on the web may also be decoupled from phone-based contact centres - although some will undoubtedly be multi-channel . In many instances, new models of communication will be invented - a permanent telepresence "window" between two offices doesn't really fit with the "call" and number-based UC system. The benefits of dis-unification (to users and developers) would likely outweigh the management/organisational downsides of UC.

Some of the DUC applications will be standalone communications services (as Skype, Talko and many conferencing/webinar platforms are today), while others will integrate audio, video or IM functions directly into other software or websites. Many, but not all, will based on WebRTC, perhaps using developer-centric 3rd-party platforms like Genband Kandy or Acision Forge.

The ramifications of this trend are huge - and largely under-appreciated by the UC community. Globally, there be 1.7bn people using communications as part of their work by 2019 - but Disruptive Analysis forecasts only 23% (400m) will have a formal UC/IP-PBX "seat" - and even most of those will use some form of DUC applications at least occasionally, as well as their main "corporate" system.

The other 1.3bn will use a mix of standard telephony (mostly mobile, GSM/UMTS plus a small % of VoLTE), or various form of VoIP, Video and cloud communications. Even among the hard-core of global "knowledge workers", there will be 600m who use WebRTC at least sometimes in their job - yet fewer than 100m of those will be using it in the context of their UC system. The vast bulk of business interactions via WebRTC will be dis-unified.

Put another way, by 2019, the number of dis-unified communications users in business will probably be twice the number using UC, whether premise-based or hosted. This is as big a trend in enterprise communications as so-called "OTT" apps are for telcos. 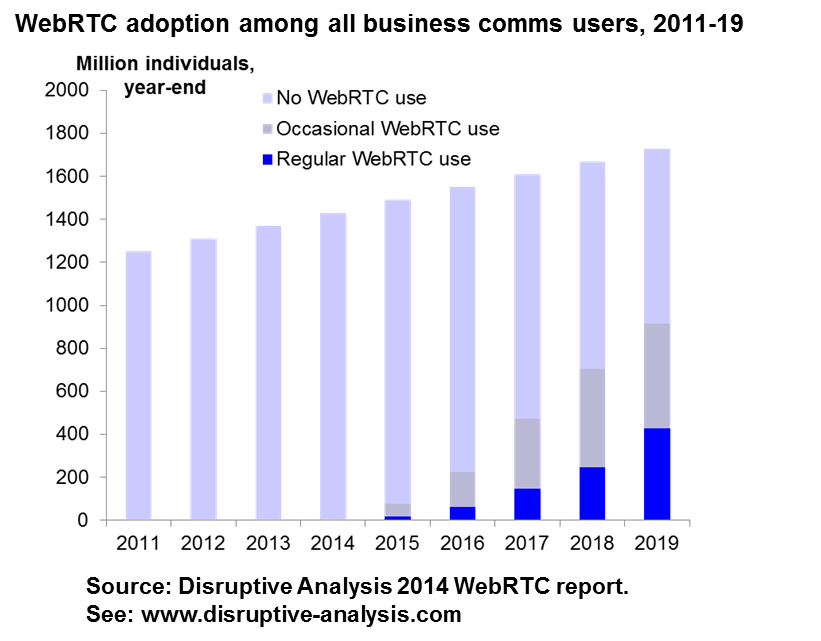 For a full analysis of the impact of WebRTC on UC & DUC, see Disruptive Analysis' research report, which covers the enterprise market as well as telecoms and the consumer web. Purchasers will also receive an upcoming update document. Please click here for details.

Dean Bubley, founder of Disruptive Analysis and author of this article & the report, will be at Enterprise Connect in Orlando on March 16-17, and UCExpo in London on April 21-22. Please contact information AT disruptive-analysis dot com for briefings, speaking engagements and private workshops/consulting
Posted by Dean Bubley at 4:18 pm 2 comments: