There are 3 main models emerging for organising edge-computing services and infrastructure:

These are not 100% mutually-exclusive - various hybrids are possible, as well as "private edge" facilities directly owned by enterprises or large cloud providers. They will also interact or integrate with hyperscale-cloud in variety of ways.

But there is a major issue. All of these will be impacted by even faster-evolving changes in the ways that users access networks and applications, such as "fallback" from 5G to 4G, or switching to WiFi. In other words, the most relevant "edge" will often move or blur. Superficially "good" edge-compute ideas will be forced to play catch-up to deal with the extra network complexity.

Note: this is a long post. Get a coffee.

A major area of focus for me in 2019 is edge-computing. It’s a topic I’ve covered in various ways in the last two year or so, especially contrasting the telecom industry’s definitions/views of “in-network” edge, with those of enterprise IT and IoT providers. The latter tend to be more focused on “edge datacentres” in “edge markets” [2nd-tier cities] or more-localised still, such as on-premise cloud-connected gateways.

I wrote a detailed post in 2018 (link) about computing power consumption and supply, which looked at the future constraints on edge, and whether it could ever really compete with / substitute for hyperscale cloud (spoiler: it can't at an overall level, as it will only have a small % of the total power).

I’m speaking at or moderating various edge-related events this year, including four global conferences run by data-centre information and event firm BroadGroup (link). The first one, Edge Congress in Amsterdam, was on 31st January, and followed PTC’19 (link) the week before, which also had a lot of edge-related sessions.


(I’m also collaborating with long-time WebRTC buddy Tsahi Levent-Levi [link] to write a ground-breaking paper on the intersection of edge-computing with realtime communications. Contact me for details of participating / sponsoring)

A huge diversity of companies are looking at the edge, including both established large companies and a variety of startups:
Each of these brings a different definition of edge - but also has a different set of views about networks and access, as well as business models.

Set against this wide array of participants, is an even more-diverse range of potential applications being considered. They differ in numerous ways too - exact latency needs (<1ms to 100ms+), mobility requirements (eg handoff between edge sites for moving vehicles), type of compute functions used (CPUs, GPUs, storage etc), users with one or multiple access methods, security (physical or logical) and so on.

However, in my view there are two key distinctions to make. These are between:
For telcos in particular, there is an important subset of edge applications which definitely are single-network and internal, rather than client-facing: running their own VNFs (virtual network functions, security functions, distributed billing/charging, and managing cloud/virtualised radio networks (CRAN/vRAN). They also typically have existing relationships with content delivery networks (CDNs), both in-house and third-party.

This "anchor tenant" of on-network, single-telco functions is what is driving bodies like ETSI to link MEC to particular access networks and (largely) individual telcos. Some operators are looking at deploying MEC deep into the network, at individual cell towers or hub sites. Others are looking at less-distributed aggregation tiers, or regional centres.

The question is whether this single-network vision fits well with the broader base of edge-oriented applications, especially for IoT and enterprise. 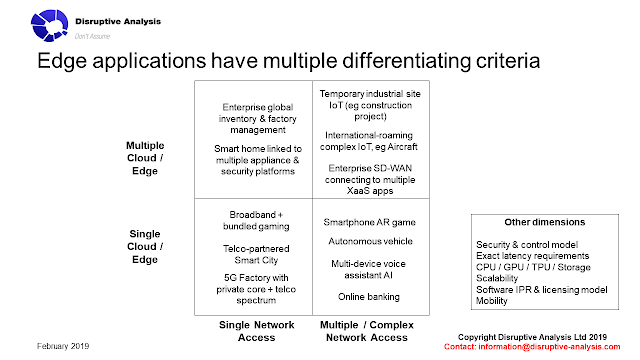 
The telco edge evolution (whether at region/city-level or down towards cells and broadband-access fibre nodes) is not happening in isolation. A key issue is that wide availability of such edge-cloud service - especially linked to ultra-low-latency 5G networks - will come after the access part of the network gets much more complex.


From a developer perspective, it will often be hard to be certain about a given user’s connectivity path, and therefore which or whose edge facilities to use, and what minimum latency can be relied upon:

This means that only very tightly-specified “single-network” edge applications make sense, unless there is a good mechanism for peering and interconnect, for instance with some form of “local breakout”.


So for instance, if Telco X operates a smart-city contract connecting municipal vehicles and street lighting, it could offer edge-compute functions, confident that the access paths are well-defined. Similarly it could offer deep in-network CDN functions for its own quad-play streaming, gaming or commerce services.

But by contrast, an AR game that developers hope will be played by people globally, on phones & PCs, could connect via every telco, ISP & 3rd-party WiFi connection. It will need to be capable of dealing with multiple, shifting, access networks. An enterprise whose employees use VPN software on their PCs, or whose vehicles have multi-network SIMs for roaming, may have similar concerns.


I had a bit of an epiphany while listening to an Equinix presentation at PTC recently. The speaker talked about the “Interconnected Edge”, which I realised is very distinct from this vision of a single-telco edge.

Most of the datacentre industry tries to create facilities with multiple telco connections - ideally sitting on as many fibres as possible. This allows many ingress paths from devices/users, and egress paths to XaaS players or other datacentres. (This is not always possible for the most "remote" edges such as Pacific islands, where a single fibre and satellite backup might be the only things available).


And even for simple applications / websites, there may be multiple components coming from different servers (ads, storage, streaming, analytics, security etc) so the immediate edge needs to connect to *those* services with the easiest path. Often it’s server-to-server latency that’s more important than server-to-device, so things like peering and “carrier density” (ie lots of fibres into the building) make a big difference.

In other words, there are a number of trade-offs here. Typically the level of interconnectedness means more distance/latency from each individual access point (as it's further back in the network and may mean data transits a mobile core first), but that is set against flexibility elsewhere in the system.

A server sitting underneath a cell-tower, or even in a Wi-Fi access point, will have ultra-low latency. But it will also have low interconnectedness. A security camera might have very fast local image-recognition AI to spot an intruder via edge-compute. But if it needs to match their face against a police database, or cross-check with another camera on a different network, that will take significantly longer.

But edge datacentres also face problems - they will typically only be in certain places. This might be fine for individual smart-city applications, or localised "multi-cloud" access, but it still isn't great for multinational companies or the game/content app-developers present in 100 countries.

The answer seems to be some form of software edge-federation or edge-broking layer, which can tie together a whole set of different edge resources, and hopefully have intelligence to deal with some of the network-access complexity as well.

I've been coming across various companies hoping to take on the role of aggregator, whether that's primarily for federating different telcos' edge networks (eg MobiledgeX), or helping developers deploy to a wider variety of edge-datacentre and other locations (eg Ori).

I'm expecting this space to become a lot more complex and nuanced - some will focus on being true "horizontal" exchanges / APIs for multi-edge aggregation. The telco ones will focus on aspects like roaming, combined network+MEC quality of service and so on. Others will probably look to combine edge with SD-WAN for maximum resilence and lowest cost.

Yet more - probably including Amazon, Microsoft and other large cloud companies - will instead look to balance between edge vs. centralised cloud for different workloads, using their own partnerships with edge datacentres (perhaps including telcos) and containerisation approaches like Amazon's Greengrass.

Lastly, we may see the emergence of "neutral-host" networks of edge facilities, not linked to specific telcos, data-centre providers or fibre owners. These could be "open" collaborations, or even decentralised / blockchain-based approaches.

The "magic bullet" here will be the ability to cope with all the network complexities I mentioned above (which drive access paths and thus latencies), plus having a good geographic footprint of locations and interconnections.

In a way, this is somewhat similar to the historic CDN model, where Akamai and others grew by placing servers in many ISPs' local networks - but that was more about reducing latency from core-to-edge, rather than device-to-edge, or edge-to-edge.

I doubt that this will resolve to a single monopoly player, or even an oligopoly - there are too many variables, dimensions and local issues / constraints.

There are 3 main models emerging for organising edge-computing services and infrastructure:

These will overlap, and hybrids and private/public splits will occur as well. 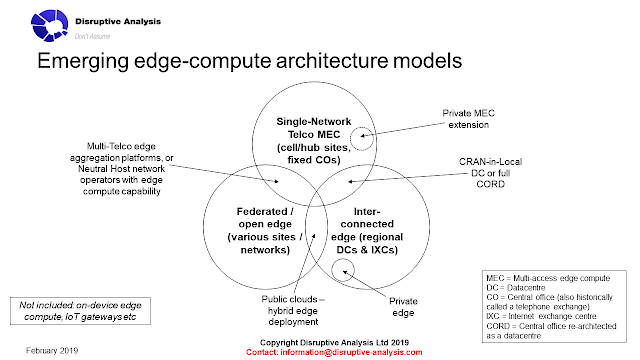 My current view remains that power constraints mean that in-network [telco-centric] edge cannot ever realistically account for more than 2% of overall global computing workloads or perhaps 3-5% of public cloud services provision, in volume terms – although pricing & revenue share may be higher for provable lower latencies. Now that is certainly non-trivial, but it’s also not game-changing.

I also expect that in-network edge will be mostly delivered by telcos as wholesale capacity to larger cloud providers, or through edge-aggregation/federation players, rather than as “retail” XaaS sold directly to enterprises or application/IoT developers.

I’m also expecting a lot of telco-edge infrastructure to mostly serve fixed-network edge use-cases, not 5G or 4G mobile ones. 5G needs edge, more than edge needs 5G. While there are some early examples of companies deploying mini-datacentres at large cell-tower “hub” sites (eg Vapor.io), other operators are focusing further back in the network, at regional aggregation points, or fixed-operator central offices. It is still very early days, however.

The edge datacentre business has a lot of scope to grow, both in terms of networks of micro-datacentres, and in terms of normal-but-small datacentres in tier-2/3/4 cities and towns. However, it too will face complexities relating to multi-access users, and limited footprints across many locations.

The biggest winners will be those able to link together multiple standalone edges into a more cohesive and manageable developer proposition, that is both network-aware and cloud-integrated.

The multi-network, multi-cloud edge will be tough to manage, but essential for many applications.

It is doubtful that telco-only edge clouds (solo or federated) can work for the majority of use-cases, although there will be some instances where the tightest latency requirements overlap with the best-defined connectivity models.

I'm tempted to create a new term of these players - we already have a good term for a meeting point of multiple edges: a corner. Remember where you first heard about Corner Computing...

If you are interested in engaging me for private consulting, presentations, webinars, or white papers, please get in touch via information at disruptive-analysis dot com, or my LinkedIn and Twitter.

I will be writing a paper soon on "Edge Computing meets Voice & Video Communications" - get in touch if you are interested in sponsoring it. Please also visit deanbubley.com for more examples of my work and coverage.