Private 4G/5G: Three Markets, Not One

But from recent conversations, client engagements and events, it’s becoming increasingly clear that many don’t quite grasp how private cellular use-cases are segmented – and why it’s going to get even more complex in the next 2-3 years.

In reality, this isn’t really “a market” in a singular sense. It’s currently at least three separate and distinct markets, with only minimal overlap at present. The main common thread is the deployment of cellular (3GPP 4G/5G) networks by non-MNOs. 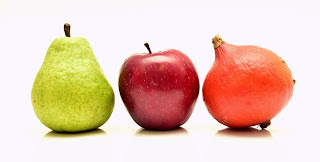 A common fallacy involves talking about “vertical industries” as the main way to divide up the sector. But that doesn’t really work, as any given vertical has dozens of sub-categories and hundreds of potential applications and deployment scenarios. For instance, the “energy vertical” covers everything from a gas station, to an offshore windfarm, a 1000km pipeline or an oil-futures trading floor in a financial district.

Verticals are useful ways to divide up sales and marketing efforts, and make sense for cohesive reports, papers or webinars, but also blend together elements of three very different markets for private 4G/5G:

It is worth discussing each of these in turn.

These have made up the bulk of major private network deployments over the last 5-10 years. They are typically deployed for utilities, oil & gas, mining, public safety, airports and military purposes. Often, they are used in rugged environments, for human communications (typically push-to-talk), as well as in-vehicle gateways and specific automation systems such as remote sensors and monitoring systems. The specialised GSM-R system for railways fits in this category as well.

Usually, they are replacing alternatives such as private mobile radio (PMR), TETRA and microwave fixed-links. They have typically been packaged and deployed by specialist integrators for sectors like oil-rigs or field-deployment by military units. There is limited “replicability”. They vary widely in size, from a single portable network for public safety, up to a national network for a utility company.

There is little need for interconnection with public mobile networks; indeed it may be specifically avoided in order to maintain isolation for optimal security and “air-gapping” for critical applications.

Most are 4G, reflecting mission-criticality and its frequent need for proven, mature technology and wide product availability. 5G is however used in certain niches and is being tested widely, although the most useful features will only arrive when Release 16/17 versions are commercialised in the next few years.

This includes some of both the oldest and newest deployments. Early local private 2G/3G networks essentially used GSM phones and thin slices of light-licensed/unlicensed spectrum to replace DECT cordless phones in a few markets – notably the UK, Netherlands and Japan.

They could also work with multi-SIM phones to blend public and private modes. I first saw an enterprise-grade GSM picocell in 2001, and an on-premise core network box in 2005. There are still several thousand such networks around, including ones updated to 4G and some that run on ships or onboard private jets.

More recently, there has been growing interest in using private 4G/5G to create neutral host networks for in-building, or on-campus coverage. There are multiple models for neutral host (I’ve counted around 10-15 variations), with some needing a full local network with its own spectrum and core, and others just relying on the tenant MNOs’ active equipment. In the US, CBRS-based options may turn out to be among the more sophisticated.

Whether used to support public MNOs more effectively than alternative indoor systems such as DAS (distributed antenna systems), or perhaps for linking to a UC / UCaaS system for enterprise voice, the main use-cases are for phones. They are almost always deployed for a single building or campus.

This segment is the most likely to require interconnection with the public mobile infrastructure, as well as supporting normal “phone calls” rather than push-to-talk voice.

This category of private cellular is probably receiving the greatest attention from many newcomers to the sector, as well as external observers such as analysts and journalists.

It ties in with many of the newest trends around cloud and edge-computing, AI and machine vision in factories, robots and AGVs in warehouses, security cameras and more general IoT / smart building use-cases. It aligns with many of the "transformation" projects in IT, plus some parts of the OT (operational technology) space such as smart manufacturing.

As such, it tends to be viewed as a complement – or alternative – to other IT-type network technologies like Wi-Fi and fibre-based ethernet. And given that many of the use-cases have a heavy cloud (or at least multi-site WAN) orientation, there is more acceptance of virtualisation of cores and perhaps in future the RAN.

This is currently the area with the greatest amounts of experimentation and innovation – although actual large-scale operational deployments are still relatively few. There is more focus on 5G than 4G, although that might change as executives learn more about the practicalities and economics. Vendors often orient on the soundbite that "private 5G should be as easy as Wi-Fi".

There is a major focus on automation, replicability and ease-of-use. This was exemplified by the recent AWS Private 5G announcement, which seems squarely aimed at this segment.

However, there is perhaps a divide opening between the IT-type scenarios (where it can be seen as a sort of enterprise Wi-Fi-on-steroids vision) and OT deployments in which it gets embedded into larger industrial automation or other systems, such as factory robots or dockside cranes. In the latter scenarios we can see companies like Siemens integrating cellular into their wider systems, just as they have historically used Wi-Fi/WLAN and fibre.

Although the main focus is on building / campus networks for this model, it may also extend to larger domains such as smart cities, as well as multi-location users such as retail chains.

There is some overlap with the critical communications segment, but that is fairly rare at the moment, especially given the lesser role (and trust) of public cloud in many of those areas.

In addition, there is a fair amount of talk about interconnection with the public mobile network (especially where telcos are acting as vendors), but in reality, that's a secondary consideration that doesn't go much beyond a PowerPoint slide for now. There are certain exceptions which are interesting, but they're far from typical.

Conclusions and the Future of Private Networks Segmentation

At present, the "private 5G market" is actually at least three separate markets. And it's mostly about private 4G rather than 5G. Critical communications networks, indoor mobile phone networks and cloud/IT/IoT networks are largely distinct in terms of motivations, channels, economics, devices and applications. There is much less overlap than many observers expect.

(There are also smaller adjacent sectors such as community networks, 4G/5G-based FWA and other specialities).

But over the next 1-2 years, we can expect the three bubbles on the Venn diagram to overlap more – although asymmetrically. Critical and cloud/IoT networks will start to become hybridised. Critical 4G/5G networks in mines or utility sites will start to support extra IT-like applications, for instance (although that probably won't need formal network slicing).

Some enterprise private cellular networks will examine adding neutral-host and inbound roaming or interconnect from public MNOs' subscribers – although there are assorted regulatory and security/operational hurdles to address.

There won't be much overlap between critical networks and neutral/guest cellular, though. Nobody's smartphone will be roaming from their normal consumer 5G network onto the utility company's private infrastructure, I think. A few employees' devices might have special arrangements though.

But we will also see the emergence of a number of additional bubbles on the chart, some of which are more like "quasi-private" models, such as outdoor neutral host networks, selling wholesale capacity to MNOs. There will be various forms of Wi-Fi integration (but probably less than many expect / want). And we will undoubtedly see maturity of both cloud-delivered private cellular like AWS's, and (belatedly) some sort of MNO-based network slice integration.

And if you want an "outlier" to ponder, consider the potential for grassroots private "consumer-grade" 5G. There's a lot of hype about things like Helium's decentralised and blockchain-based model, but I'm deeply sceptical of this (that's for another post, though). More likely is the emergence of a true Wi-Fi hotspot approach, where we start to see lightweight "free 5G" options, using unlicensed (or maybe CBRS GAA) spectrum, with a cheap core and small cell. Scan the QR code next to the barista to download your eSIM, and you're good to go…. 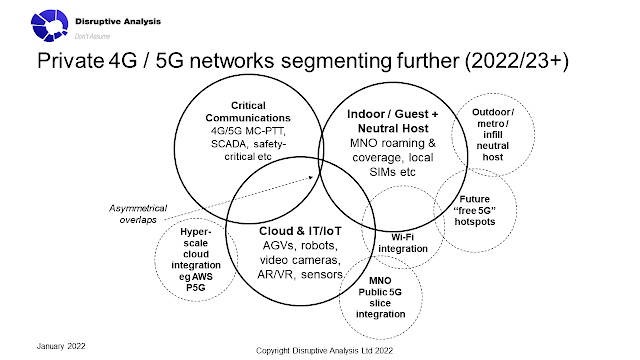 The bottom line is that the private 4G/5G market is complex and nuanced. Market statistics frequently combine everything from a nationwide utility's or railway's critical infrastructure, to a few small-cells connecting up digital signs in a mall car-park. It's easy to assume it's all about millisecond-latency robots zipping about factories, rather than a security guard with a handheld radio, or indoor network coverage for a hotel.

Operators, vendors, enterprises and governments need to delve a bit more deeply than just talking about "verticals" for private cellular, or else they risk making errors with their product portfolios or regulatory direction.

Dean Bubley (@disruptivedean) is a wireless technology analyst & futurist, who advises a broad range of companies and institutions active in the 5G, Wi-Fi and cloud marketplaces. He has covered private cellular networks for more than 20 years. He is a regular speaker and moderator at live and virtual events. Please get in touch on LinkedIn or via information AT disruptive-analysis DOT com for advisory or speaking requests.

Posted by Dean Bubley at 2:37 pm No comments: