Hubris: "an extreme and unreasonable feeling of pride and confidence in yourself"

I've followed developments in the telecoms industry for over 25 years. I've seen positives (eg broadband, SMS, LTE) and negatives (UMA, RCS) as well as a shifting landscape of regulation, the rise of the Internet, and multiple generations of network technology and services infrastructure.

Undoubtedly, both fixed and mobile networks have added massively to economies, society and our current way of life. It's understandable that network operators - and their vendors and governments - feel proud of their legacy and want to perpetuate it.

Yet it's possible to take this too far. Even beyond obviously-silly pronouncements such as "5G is as important as electricity", there remains a constant thread among the telecoms industry that it is absolutely central to all future developments, and that the network's finely-engineered QoS mechanisms are the wellspring of technology-derived value, as well as pivotal to future GDP and world happiness.

But while self-belief and aspiration is helpful, arrogance and self-delusion is not. 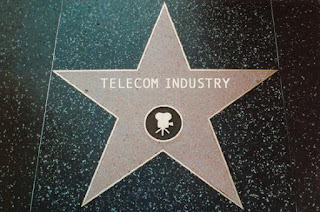 There is an assumption that the (public, traditional) network is always the leading actor in any movie about Industry 4.0, IoT, smart homes, AI, pandemic recovery & the "new normal", combating climate change, or creating new modes of communications and entertainment like AR/VR.

And yet in reality, the telecom network - especially public 5G - is often going to be a supporting actor. Or perhaps just have a walk-on role, or be relegated to an extra who gets dubbed in a different language.

You can almost imagine a C-list celebrity arriving at a busy party and shouting: "Guys, guys! Listen up! You can get rid of all your old stuff, all your Internet apps, all your legacy Industry 3.0 gear... just use our new [Technology X] instead, and we'll offer it all with a nice monthly per-GB subscription. You can even buy a slice!"

A bit more realism and humility is required. Telecoms isn't always the star of the show, and neither does it write the screenplay for the rest of the infrastructure or solution.

That doesn't mean it lacks value, or has a limited opportunity - but that it has to play nicely alongside others... and accept that the director and producer have other priorities to focus on - and a wide choice of alternatives to cast in the same roles.

Leaving the acting analogy aside, it's also important to understand that the nature of the word "telco" is itself changing. Looking out to 2030, the "telco of the future" isn't like todays - there won't just be 3-4 national MNOs and a handful of converged/fibre/fixed-line operators. There will be a vast diversity of service provider types and private/community networks. I've written before about the "new telcos" and this is a critical aspect for traditional ("legacy"?) operators to understand and even embrace.

It's tempting to just see this as a problem with how 5G is being positioned and hyped. But while I discuss that below, it's far from being unique. This attitude has been around for years, and pervades the entire industry. Some examples of this mindset include:

The ridiculous and judgmental term "OTT" exemplifies this - creating a them-and-us fallacy of "web" companies using "our" pipes. Never mind the fact those technology companies build their own infrastructure, and invest billions in R&D for everything from AI to chip design. Or that all telcos themselves deploy "OTT" apps, websites and Internet-delivered functions.

To use a more sociological phrasing, many network operators still have a "sense of entitlement". They feel that they should be running everything from voice and video communications to networked entertainment, smart homes, or B2B commerce and industrial automation.

This attitude extends into public policy, and discussions on topics like spectrum, where there is a sense of exerting "license privilege". There is often an attempt to exert control before earning it. This is different to (say) Apple's control of its AppStore.

(*Sidenote [And apologies to my clients if this stings!]:if you work in telecoms & talk casually about "OTTs" for anything other than TV streaming, you should be fired, and so should your boss. It's not only wrong, it's flat-out ignorant and damaging. It indicates gross incompetence. It's not quite a "hate crime" but it is a them-and-us divisive term for a distinction that simply does not exist).

There are several reasons why this problem is more than just "attitude" or normal marketing-related hyperbole. It directly translates to business successes and failures.

What needs to change?

There needs to be a frank, honest discussion about "Telcos' place in the world", which works out how to transition from a world of a few licensed network operators per country, to one in which the landscape is much more complex and nuanced.

It has been interesting to see that the most interesting - and lauded - new telcos have come from different backgrounds, and have different attitudes. Rakuten is a cloud/eCommerce company first and foremost. Dish started as a satellite TV provider. Jio's parent Reliance Industries is a broad conglomerate. Although not a new company, South Korea's SKT is part of the SK Group, which also has a broad set of non-telco assets.

To be fair, one area where telcos are taking a more hybrid position is around physical assets. Some are operators/co-owners of shared networks, some spin-out tower businesses, some sell dark fibre and some buy - or both in different places. Some use public colocation and data-centres, while others are looking at local offices as possible edge compute sites.

This undoubtedly comes across as a bit of a rant (and not for the first time...) but it's coming from a position of frustration. I've seen the same issues play out for years - and at the core is this attitude of entitlement that I mention above.

It's totally counterproductive, even if the inertia - and sense of history - is understandable.

Everyone wants to be the star, especially if they've been the lead actor for decades. But sometimes, the role just involves a couple of scenes. And often, it's just the cameo roles - if played well - that get the headlines after all.

Posted by Dean Bubley at 9:29 pm No comments:

Why does the Edge Computing sector ignore Wi-Fi?

We should be talking more about Wi-Fi-Edge as well as 5G-edge. Arguably, it is more important (along with fibre-connected edge)

Given today's Wi-Fi often has lower latency than current 5G versions (2-5 milliseconds is common), and many devices such as AR/VR headsets don't have 5G radios, this seems odd.


Many of the use-cases for advanced connectivity, especially IoT in smart buildings and smart homes, as well as gaming and content/video display, uses Wi-Fi predominantly. 5G won't replace it.

They might use cloud-type software stacks, and use hyperscale cloud for deep analytics, but there will be various reasons for on/near-prem edge.

Offices connect all laptops, collaboration/meeting systems and screens with Wi-Fi. Wi-Fi dominates in education. Even in retail settings and #smartcities, there's a lot of Wi-Fi or proprietary industrial WLAN variants.

In homes, the opportunity is almost entirely about #WiFiEdge. TVs, laptops, voice assistants, smartphones, tablets, AR/VR headsests and most other residential devices connect with Wi-Fi (plus some short-range Bluetooth, ZigBee etc). Very few end-devices inside the home connect with 4G/5G, and even in future the low-band 5G connections that penetrate the walls likely won't support the ultra-low latencies that many talk about.

All of these have significant links to #cloud platforms and applications. Indeed, many higher-end Wi-Fi systems are themselves cloud-controlled.

Outdoors, especially for mobile and vehicular use-cases, #5GEdge (& 4G for years) will be important plus maybe SatelliteEdge & LoRaEdge

In general, I'd expect "fixed edge" of one sort or another to be far more important than "mobile edge" or MEC. In many ways, it already is, given #CDNs largely service fixed broadband use-cases.

Possibly this is just reflecting a lack of marketing - or perhaps the cloud/edge/datacentre sector has been blinded by #5Gwash hype and has forgotten to focus on often more-important technologies for some critical applications - whether that's security-camera analytics or multiplayer games. They may well need low-latency or secure on-premise compute, but won't (often) be using 5G.

This also perhaps reflects the fact that 5G needs some edge-compute for its own operation (especially Open RAN), so the industry is trying to offset the costs by hyping the potential revenues of using that infrastructure for customer applicatins as well. That's less true for other connectivity types, although fixed/cable broadband has a lot of localised compute infrastructure too.

I'm curious to see if this blending of #WiFiEdge has resonance. At the very least I think the Wi-Fi and fixed-broadband providers should be making much more noise about it. Seems bizarre that 5G-edge gets all the attention when it is, well, a bit of an edge-case.