5G as an enterprise LAN / Wi-Fi replacement is a myth

There are at least 10 reasons why 5G will not be a viable WLAN (wireless local area network) technology for mainstream enterprise. Despite recent claims to the contrary, it is not an alternative to Wi-Fi in offices, hospitals, apartment blocks or similar locations.

Enterprises, investors, policymakers and vendors should be extremely skeptical of assertions 5G will displace mainstream Wi-Fi uses. Indeed, they should question the credibility and honesty of those uttering such claims.

There will certainly more deployments of indoor cellular (including private and neutral host networks) in future, but these will almost all be incremental and not substitutional to Wi-Fi. They may be used for IoT/OT uses, but typically these will be entirely new.

4G / 5G technologies will not be integrated into most laptops or tablets, despite hype.

This post looks at why 5G cannot replace enterprise Wi-Fi - including numerous obvious reasons - and then examines why the cellular industry (which mostly understands the problems) is pretending otherwise. What's the story behind the unrealistic fantasy?

(It's quite long. Get a coffee first.)


What is wireless used for in enterprises?

Before drilling into the specifics of 5G, it is worth looking at how and why wireless gets used in enterprises at a local area. Local area here means a single office or site - whether that's an office block, a supermarket, a hospital or a factory. Some locations have multiple LANs across several buildings on a campus network, such as a university, corporate HQ site or major new property development.

(By contrast, WANs run over wide areas, such as between a retail chain's stores and warehouse sites in different cities, or linking a multinational bank's offices in several countries. Huge locations like smart cities and airports are somewhere in the middle).

A top-level list of local wireless uses, often with separate infrastructure, includes:
While some of these categories overlap (for example, smartphone connections), others remain pretty well-defined in practice. Yet often, they get conflated, especially in discussions about the future roles of 4G/5G cellular networks, whether run by mobile carriers, or new/specialist indoor operators and the enterprises themselves.

This post is specifically about the IT/LAN/Internet access use-case. I think cellular has a lot to offer IoT (especially mobile IoT) for enterprise, as well as OT in industrial settings. We will also see more indoor / premises neutral-host networks (NHNs) both for coverage and private onsite voice/smartphone access. However, none of those generally gets classed as "LAN" connections.

(SAVE THE DATE: I will be running a private workshop in London on July 9th about NHNs, looking at both indoor and wide-area / metro / rural uses and deployment scenarios) 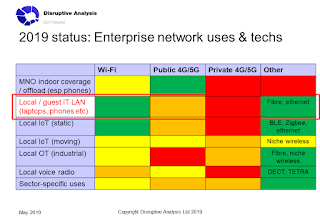 Why can't 4G/5G be used for wireless LANs instead of Wi-Fi?

At the heart of this debate is whether 3GPP cellular technologies can be used for local-area computing networks, especially for laptops, tablets and private smartphone use. Can it replace fixed ethernet and especially Wi-Fi connections? Will future PCs connect to the Internet via 5G? I'm being asked this by various of my clients, so it's worth going in to some detail here (and obviously, more detail & analysis for paying advisory customers)

This is not a new discussion - the 3GPP vs. IEEE standards war has waged for decades. I've addressed the topic multiple times, whether that's been about in-home usage (link), debunking the "5G will kill WiFi" myth (link) or discussing the important role for private cellular in industry and the need for local spectrum licensing (link).

I can see at least 10 reasons why cellular (whether provided by MNOs as a service, or owned by the business or an NHN provider) is not a suitable IT LAN technology for enterprise:
I could go on. Some of these will change, some will have rare exceptions, and some industries will have particular local requirements for whatever reasons. But the underlying story is clear: 5G is not a Wi-Fi replacement for the enterprise.

This should not really be a surprise to anyone. I honestly find it hard to believe that most people involved in networks/telecoms don't realise at least 4 or 5 of these points off the top of their heads.

Historical note: I've been skeptical of cellular-enabled laptops since 2006 (link). I wrote a full report in 2008 (link), which was actually far too optimistic (I predicted 30% attach-rate by 2011) despite being criticised as too-negative by the cellular industry. Most of the arguments remain valid for 5G.


So why the hype?

What's a bit baffling is why the 5G/WiFi replacement fantasy is becoming more common. Even AT&T's CEO was quoted at the company's financial results event (link) as saying "It’s serving as a LAN replacement product". Other 5G-centric commentators have said similar things.

To be fair, in some cases it will be genuine ignorance, although frankly anyone that clueless about enterprise networks shouldn't be making pronouncements anyway. Another more important issue is the conflation of all the different use-cases for connectivity (as above), and people conflating the LAN, offload and IoT domains in particular. Through that lens, the AT&T statement could (very generously) be considered applicable to some IoT scenarios.

Yes, 5G has a long-term role in some industrial verticals, especially with time-sensitive networking and private control of core and/or radio & spectrum. Neutral-host cellular will be important indoors too. But controlling robots & process machinery, or doing asset-tracking in a hospital, is not the same as accessing SaaS applications from a laptop or tablet, or local IoT applications from billions of devices with local gateways. Neither is using a new 4G/5G CBRS or local-spectrum network for "reverse roaming" or "MVNO onload" really a LAN business either.

But I think there are a few other more cynical reasons in play too:

So to sum up:
Overall, the key takeout:
Private/enterprise 4G and 5G networks have lots of potential future use-cases & market opportunities. Replacing Wi-Fi for IT/Internet access LANs is not one of them. 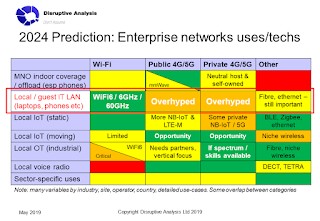 Note: if you're interested in deeper analysis, or a private workshop / advisory engagement on this topic, please drop me an email at information at disruptive-analysis DOT com, or contact me via LinkedIn or Twitter.

Also - on July 9th, I'm running a London private workshop on Neutral Host Networks, together with Peter Curnow-Ford of Viatec Associates. Drop me a message if you're interested, and look out for full details & registration coming very soon.
Posted by Dean Bubley at 3:15 pm No comments: