Last week, I was in Mainz in Germany, at a European telecom regulator's workshop about spectrum and technology evolution for future 5G networks. (link). It was a very formal event, with most people from government agencies, technology standards bodies and telcos, broadcasters and the like. Some industry verticals such as energy, rail and automotive were also represented. I was one of the few analysts there - and there were no journalists, I think.

This week, I've been in San Francisco, at a very different style of event, about Artificial Intelligence. (link). It was a multi-streamed conference, with a small expo area, a press office, lively panel sessions - and a selection of Silicon Valley's finest, from VCs to Google to Uber to innovation outposts of GE and Airbus, as well as countless software startups and enterprise IT folk.

I was there as part of my TelcoFuturism research effort (link) where I'm looking at the impact and opportunities of technologies such as AI, blockchain, drones, AR/VR, robotics and quantum computing on the telecoms industry. I was interested to see both internal applications of AI in running telcos' networks and IT systems, and also in terms of scope for new services and driving connectivity.

It's that last thing that struck me most. There is a huge gulf between the expectations of the 5G community (which talks endlessly of self-driving cars and robots using ultra-high performance mobile networks, or "massive Iot" networks of sensors and actuators) and the AI and robotics community (which doesn't).

I asked quite a lot of people developing both AI software (which is a huge diversity from deep-learning, to image-processing, to personal assistants and bots) and hardware and applications (autonomous vehicles, GPUs etc) how important networks were to their innovations.

The general answer: not that much. They want as much processing done on the device itself as possible, not controlled remotely or from the cloud, especially where anything safety-critical is involved. A speaker from Nvidia showed a board that is essentially a vehiclular supercomputer, using inputs from cameras, engine monitoring, LIDAR and all sorts of other sensors to work out what to do. A self-driving car is not going to ask the cloud for permission to brake in an emergency. There is a recognition that networks are not ubiquitous or completely reliable, so they need to act independently - autonomous means autonomous. This also means much lower latencies.

Other companies are working on facial/emotional recognition systems that can be embedded in smartphones, or even directly in camera hardware, without the need for an OS - or sending data to/from the network all the time. The speaker from GE said that aircraft engines may generate terabytes of data during a flight - but have enough onboard intelligence to do analytics, optimisation and even self-maintenance in flight. That doesn't mean they won't also transmit telemetry data via satellite (or maybe air-to-ground 5G in future), but that likely won't be for realtime control.

The line from Nvidia's website (link) that should be read carefully by 5G advocates is this:

"With a unified architecture, deep neural networks can be trained on a system in the data centre and deployed in the car"

However, that is not to say there is no requirement for connectivity. There will be a lot of data flowing around, generated by sensors or user/device behaviour, fed back to a machine-learning system and analytics function to help develop, train and improve future algorithms and models. But that doesn't need to be realtime - it can wait until the car gets home, or the handset dips back into 4G/5G/WiFi coverage. Vehicle-to-vehicle data flows will be useful in helping build a better picture of the context, but that is a secondary consideration at the moment, and also may well not involve cellular connections.

There will also be a need for non-critical information to use the network, such as mapping and navigation data for vehicles, entertainment for passengers, or advertising overlays for an AR headset. In an IoT context, the irrigation data from one farm's sensors will implicitly be helping train the AI system used to manage other locations' (and maybe even other industries') systems.

I think there is a gulf in understanding between telecoms and AI communities. I don't think many of the 5G standards and verticals discussions factor in the rise in GPUs at the edge/in devices, for a lot of "heavy lifting". It often won't need to be done in the cloud, or even mobile edge computing nodes. Some of the VCs seemed to get "connectivity" a bit better, but even some of those seemed unrealistic about 5G timelines, deployment and capabilities.

Clearly there will still be many needs for huge volumes of 4G/5G Internet connectivity from smartphones, streaming video for various applications and a lot of genuine IoT requirements. There is definitely an ongoing business model for enhanced mobile broadband. (Sidenote for another post: Home WiFi is also going to be mesh and AI-enabled by companies like Google and Amazon).

So... I think that some of the expected critical IoT and massive IoT uses for 5G are being overstated. There may well be a need for more mobile uplink data to help train deep-learning systems and other analytics tools. But that often doesn't need to be realtime. While they might need software updates from the cloud, a lot of endpoints will be smart enough to make their own decisions and analysis without relying on he network.

I also think that in the 3-5yr timeframe for mobile and IoT 5G deployments to have broad coverage, AI technology (both software and hardware) will have progressed far beyond even where it is today. There are so many branches of AI, from deep-learning to image recognition to bots - and these have much tighter couplings with the enterprise IT systems and end-devices, than the network.

Meanwhile, the telecoms industry is looking forward to exciting 3-year processes to define "agenda items" in interminable regulatory committee stages, and regional sub-committees, before the next ITU World Radio Congress in 2019, to debate 28GHz vs. 32GHz bands, or work out how to "harmonise" 700MHz for 5G against incumbent desires of broadcasters and others.

At the moment, in the new strategic battleground of Networks vs. AI, I suspect that Moore's Law and deep-learning mostly favours the robots.

This post is from Disruptive Analysis' new TelcoFuturism research programme. This looks at strategical implications of intersections between the telecom/network industry and other adjacent trends. If you are interested in more detail about this, or to arrange an advisory briefing or keynote speaking engagement, please contact information AT disruptive-analysis DOT com.
Posted by Dean Bubley at 5:51 pm No comments:

Twitter's woes are well-known. Its user-base has been stagnating, it's been looking to be acquired, but nobody has stepped up - apparently Google, Microsoft, Facebook, Salesforce and others have looked but walked past. (Personally I'm quite glad - I'd be very upset if either Google or MS bought Twitter as they own this blog's platform and my LinkedIn account respectively, and I don't want any further consolidation of my online presence).

Other companies in the "social", "messaging" and "information flow" spaces are out-stripping it in growth and coolness - for example, SnapChat for consumers, with the addition of broadcast media-type streams from celebrities or TV channels.

But I think one important comparison and lesson from history hasn't been well-described: Twitter has some of the characteristics of BlackBerry, c2012-13. In particular, it's very hard to continue growth when your company has very disparate groups of users and use-cases, especially split between consumers and businesses.

The tensions here were very hard to reconcile. One group was interested in security, integration with corporate IT infrastructure and (hopefully) enterprise apps. The other wanted cheaper / cooler devices, support for social networking, and messaging that evolved to compete with Whatsapp and its peers with emoji and stickers etc.

The consumer team was competing (fruitlessly) against Apple's app support and brand, as well as Android's plummetting device margins. The enterprise team needed systems integration support, and was working against the BYOD tide as employees demanded to be allowed to use iPhones. Microsoft was also spending huge sums to become the #3.


I see something similar as a risk for Twitter. It too has multiple constituencies:
I fall into this last category of business users. I don't really use @disruptivedean for personal stuff, although occasionally I'll use my follower numbers as a "do you know who I am?" blunt-instrument if I want to make a point, or complain about something (sorry about that!) as I suspect it makes me appear more "influential" and prioritised for action, than a random anonymous egg account. 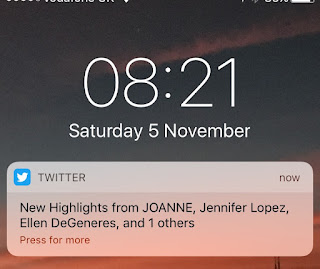 I also have screen real-estate wasted with the pointless "explore" tab, mostly giving me suggestions about sports I never watch or as right now - and I'm not making this up - "When Justin Beiber plays at your pub" and "A baby iguana chased by snakes has nation in a frenzy".

Now I recognise that other people are fascinated by this stuff. But the ongoing drift of Twitter to try to compete with SnapChat, Buzzfeed on Facebook and assorted news/media sites detracts from my (and many of my contacts') use-cases. I also need to try to keep as much of Twitter's curation algorithms away from me as possible - I want a raw feed, not what it *thinks* I want to see first, and I don't want mentions or retweets to be filtered.

Personally I try to firewall my personal social stuff (Facebook, Instagram, in the past SnapChat & I might try again) from my business life (Twitter, LinkedIn, this blog, maybe Slack in future). A couple of communications apps like Whatsapp and Skype cross the boundary, but I view Twitter as an important part of my B2B interaction. I don't want to see it getting too consumerised. Incidentally, Twitter makes some money out of me too - I sometimes pay for advertising, for example if I publish a report. (Blatant plug: buy my eSIM study! link)

So the question I have is how Twitter manages to reconcile its B2B, B2C [CRM], B2C [Media] & C2C uses without alienating any of its constituencies. Based on BlackBerry's experiences, I think it's going to struggle - unless perhaps it positions itself more as a platform, or gives users much better filtering tools.

Some people may also recall that I used to run a paid (locked) Twitter feed called DApremium (link) about 4-5 years ago. It was a nice idea and generated some revenues for me, but interaction like retweets and multi-party debates was hard because the tweets were protected. I'd definitely be interested in mechanisms to do something similar in future - and would happily do a rev-share with Twitter if it was well-designed.

Meanwhile, I'm definitely interested in other options in case Twitter decides against business users as a strategically important group. I am increasingly getting more followers on LinkedIn (it distinguishes contacts from followers if you post articles - some people don't realise), and it's a pretty good platform for discussion in comments. I'm open to other suggestions too. Meanwhile, if you're not already following me, I'm @disruptivedean for now at least! (link) as well as here on LinkedIn.

Posted by Dean Bubley at 6:52 pm No comments: