New Report on Enterprise Wi-Fi: No, 5G is not enough

Published this week: my full STL Partners report on Enterprise Wi-Fi. Click here to get the full summary & extract.

5G is not enough for solving enterprises' connectivity problems on its own. It has important roles, especially in Private 5G guise, but cannot replace Wi-Fi in the majority of situations. They will coexist.

Telcos should support Wi-Fi more fully. They need a full toolkit to drive relevance in enterprise, not just a 5G hammer & pretend everything is a nail. CIOs and network purchasers know what they want - and it's not 5G hype or slice-wash.

Newer versions of Wi-Fi solve many of the oft-cited challenges of legacy systems, and are often a better fit with existing IT and networks (and staff skills) than 5G, whether private or public.

Deterministic latency, greater reliability and higher density of devices make 6/6E/7 more suitable for many demanding industrial and cloud-centric applications, especially in countries where 6GHz spectrum is available. Like 5G it's not a universal solution, but has far greater potential than some mobile industry zealots seem to think.

- Study the roadmaps for Wi-Fi versions & enhancements carefully. There's a lot going on over the next couple of years.
- CSP executives should ensure that 5G "purists" do not control efforts on technology strategy, regulatory engagement, standards or marketing.
- Instead, push a vision of "network diversity", not an unrealistic monoculture. (Read my recent skeptical post on slicing, too)
- Don't compare old versions of Wi-Fi with future versions of 5G. It is more reasonable to compare Wi-Fi 6 performance with 5G Release 15, or future Wi-Fi 7 with Rel17 (and note: it will arrive much earlier)
- 5G & Wi-Fi will sometimes be converged... and sometimes kept separate (diverged). Depends on the context, applications & multiple other factors. Don't overemphasise convergence anchored in 3GPP cores.
- Consider new service opportunities from OpenRoaming, motion-sensing and mesh enhancements.
- The Wi-Fi industry itself is getting better at addressing specific vertical sectors, but still needs more focus and communication on individual industries
- There should be far more "Wi-Fi for Vertical X, Y, Z" associations, events and articles.
- Downplay clunky & privacy-invasive Wi-Fi "monetisation" platforms for venues and transport networks.
- Policymakers & regulators should look at "Advanced Connectivity" as a whole, not focus solely on 5G. Issue 6GHz spectrum for unlicenced use, ideally the whole band
- Support Wi-Fi for local licensed spectrum bands (maybe WiFi8). Look at 60GHz opportunities.
- Insist Wi-Fi included as an IMT2030 / 6G candidate.

Network Slicing is a huge error for the 5G industry

I've started calling myself a "Slice Denier" or "Slicing Skeptic" on client calls and conference speeches on #5G.

Increasingly, I believe that #NetworkSlicing is one of the worst strategic errors made by the #mobile industry, since the catastrophic choice of IMS for communications applications. The latter has led to the fiascos of #VoLTE and #RCS, and loss of relevance of telcos in communications more broadly.

At best, slicing is an internal toolset that might allow telco operations or product teams (or their vendors) to manage their network resources. For instance, it could be used to separate part of a cell's capacity for FWA, and dynamically adjust that according to demand. It might be used as an "ingredient" to create a higher class of service for enterprise customers, for instance for trucks on a highway, or as part of an "IoT service" sold by MNOs. Public safety users might have an expensive, artisanal "hand-carved" slice which is almost a separate network. Maybe next-gen MVNOs.

(I'm talking proper 3GPP slicing here - not rebranded QoS QCI classes, private APNs, or something that looks like a VLAN, which will probably get marketed as "slices")

But the idea that slicing is itself a *product*, or that application developers or enterprises will "buy a slice" is delusional.

Firstly, slices will be dependent on [good] coverage and network control. A URLLC slice likely won't work reliably indoors, underground, in remote areas, on a train, on a neutral-host network, or while roaming. This has been a basic failure of every differentiated-QoS monetisation concept for many years, and 5G's often-higher frequencies make it worse, not better.

Secondly, there is no mature machinery for buying, selling, testing, supporting. price, monitoring slices. No, the 5G Network Exposure Function won't do it all. I haven't met a Slice salesperson yet, or a Slice-procurement team.

Thirdly, a "local slice" of a national 5G network will run headlong into a battle with the desire for separate private/dedicated local 5G networks, which may well be cheaper and easier. It also won't work well with the enterprise's IT/OT/IP domains, out of the box.

To use an appropriate analogy, consider an actual toaster, with settings for different timing, or a setting for bagels. Now imagine Toaster 5.0 with extra software smarts, perhaps cloud-native. Nobody wants to buy a single slice of toast, or a software profile. They'll just buy a toaster for their kitchen, or or get an "integrated breakfast solution" including toast in a cafe. They won't care about the slicing software. The chef might, but it's doubtful.

If you see 5G Network Slicing as a centrepiece of future "monetisation", you're in for an unpleasant smell of burning, and probably a blaring smoke alarm too. 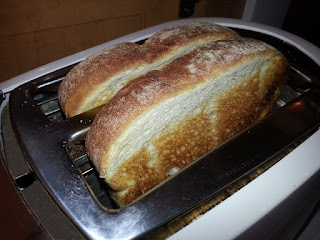