The next two weeks are going to be uncomfortable for a lot of "mobile data traffic management" vendors. Whether they have WiFi offload solutions, video optimisation offerings, small cells, policy enforcement boxes, charging and "personalisation" platforms or various other bits of network-control machinery, they will all have to think carefully about their pitch for MWC.

The problem is that the (in)famous scissor diagram of diverging mobile data traffic and revenues, that we've all seen 1000 times..... seems to be wrong. Increasingly, we see evidence that it looks more like a pair of pliers, with the lines curving back together rather than expanding exponentially away from each other, especially in more mature markets.

Now I'll be the first to say that the "big" number of TB, PB or EB delivered doesn't tell you much about actual busy cell / busy hour congestion, but it's still an interesting data-point, especially as it is so central to  many spectrum-lobbying and solution-marketing arguments.

We're in the middle of financial reporting season for telcos, and so far we haven't seen much hand-wringing about unsustainable traffic growth this time around. Vodafone's 20% data growth matches its revenue growth. AT&T's is down to about 40%, far less than it predicted in its FCC filings for its for the ill-fated T-Mobile acquisition.

Telefonica and other operators' results are due soon too. Then we've got the new Cisco VNI study and forecast out this week (I'm expecting a downgrade of its mobile data forecasts), and at some point we should get a full-year 2011 report from Ericsson & Akamai as well. The last two updates have shown different patterns - 8% Q-on-Q growth for Q2 rebounding to 18% in Q3 with the note that there are "large differences in traffic levels across markets and regions".

To be fair, it's still too early to tell if flattening data volume growth in more mature markets is a major trend, or a temporary one-off blip/correction as many operators shift to tiered plans. Yet other factors are also in play - especially WiFi use, as well as some in-network policy and optimisation.

So if the "tsunami" has indeed receded, then a few things will occur:

Most of all, though, we will see a broad range of highly questionable stats ("dodgy", in English English), especially in the PR bombardment at Barcelona, when a big slab of hyperbole is often necessary to get attention from the media.

Offload is probably going to be the biggest culprit. I'm expecting to see a lot of hype from vendors and WiFi aggregation providers claiming that X% of data traffic has been offloaded on Operator Y's network, saving $Z in incremental capex/opex.

The key question to ask (especially if you are at an operator) is "What % of total WiFi traffic do you think is actually genuine offload?". As the chart below illustrates, smartphone WiFi is much more than just offload. There is also 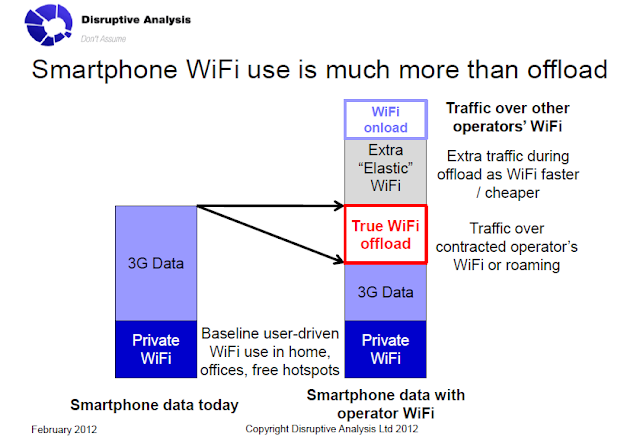 Also, it's important to think about laptop MBB differently to smartphones. Many laptop users "onloaded" to 3G only because there wasn't enough WiFi about to begin with. Increasingly, there is available WiFi, so they're not really "offloading", but merely going back to what they hoped for in the first place. A subtle difference, but important as it may mean they abandon dongles completely at some point.


A couple of discussions I've seen on Twitter and elsewhere suggests that "elastic" and some portion of private WiFi might get counted as "offload" to pump up the stats. Caveat lector....

We may also see some numbers from the video optimisation vendors, about the amount of traffic "saved". Those numbers are perhaps more realistic (ie volume in vs. volume out), but it's also important to understand "volume the user didn't bother with in the first place" with behavioural change from pricing shifts.

And of course, that's the problem. None of these things is truly independent. There are lots of feedback effects, accidents of user demographics on specific networks, impacts of shifting mix of devices - and perhaps, the impact of application and content providers doing their own "self-optimisation", for example with adaptive bitrate streaming.

Ironically, however, the main real underlying reason for flattening data growth is Cisco's VNI mobile data forecasts numbers themselves. They have been so scary, used by some many people, and seen so many times, that they seem to have prodded everyone else in the industry into action, to make sure they didn't come true.

In other words, the most important technology involved in mobile broadband traffic management is probably Microsoft Excel.

Here is Sweden the operators are marketing 3G and 4G as a home internet alternative, 3G from 10 Euro a month, 4G for 25. The marketing for the latter mentions HD streaming and online. games Only one operator has dared to refrain from monthly volume caps though.

It seems that the Swedish operators think they can make money catering to the traffic foreign operators want to avoid, or at least high-end into premium alternatives.

Personally, when travelling in Sweden, I only bother with Wifi when my 3G doesn't work. I did buy a laptop with a builtin modem so I don't have to use a dongle.

In many cases customers don't have a choice but switch to WiFi since the in-building coverage/service is inadequate.

This is very common here in the US where cellular service providers are just now trying to address the in-building coverage/service issues.

Anonymous #1 - I get missed messages about Sweden. On the one hand, 3G/4G is really inexpensive and "a home Internet alternative", on the other hand Telia is pushing really hard on WiFi offload.

In any case, there are a lot of differences - affluent customer base (limited prepay), building construction often with wood (so better indoor penetration), large local equipment vendor (and associated industry) looking for reference sites. I also suspect that the situation in the big cities is very different to outside - certainly in Norway there's a lot of places which still don't have 3G, let alone 4G, as the population density doesn't justify it.

Anonymous #2 - I think you'll find that is pretty common, especially in large cities with apartment blocks / offices with thick walls or lots of interior walls.

The scissors graph is a qualitative graph. Of course, nothing grows indefinitely. In my opinion, the graphs is just to show the trend of increasing bandwidth consumption (which in general is true), with the trend of revenues coming from voice and flat-rate packages.

If some operators are putting strong quota limitations or stop selling some new subscriptions or similar bandwidth-limiting/protection mechanims, it is no surprise that bandwidth consumption in those network will increase more slowly.

However, it does not mean that the bandwidth DEMAND is decreasing. The operator whose a big portion of users is being throttled is still facing the problem of the "scissors" figure. Its users want more bandwidth but cannot get it. Will a situation like this one be shown in the yearly reports?

I am anonymous 1. Mixed messages are rather common, aren't they?

Telia pitches their midrange 25Euro (249kr) offer as "surf often, see movies and listen to music". 20Mbit/s, 10GB month cap, after which the speed slows. If sign up for 18 months, you can buy a Dovado tiny router for 599kr.

The competitors offers are slighly better. For 229kr, Tele2 gives you 25Mbit/s with 30GB cap, with 18 months you get 4G router thrown in, so that "the whole family can surf on the same contract", "up to 32 units online at the same time".

The regulator won't allow raw speed advertising anymore, so the speeds should be achievable, at least occasionally.

Telia has offered wifi network called Homerun for a long time. Initially it was ridiculously expensive, but now they bundle it with their mobile broadband. They seem to hope that users will text homerunlogin to 4466, and then manually confire a WLAN connection. Thay do have somtething more convenient for Iphones. Telenor at least offers a program that will keep you connected to the best alternative. Unfortunately, it does not support my builtin modem.

Also common are explanations how things are different up here among the polar bears.

I don't know about "affluent customer base" really. Prepaid phone cards are popular, and 3G dongles did not take off until the providers hit 20-25 Euro/month for flat rate with perhaps a 5G cap. I commute from Uppsala, and now, most of the laptop users have a 3G dongle. It was really uncommon when the price was 50-60Euro/month.

Good coverage, even indoor, is probably correct. The place where I remember that I had to use Wifi was Novotel in Gothenburg, which is massive brick building not really in the center of town. Otherwise, I get coverage pretty much anywhere.

But I think indoor coverage is more a function of good networks rather than building methods. It is true that we use wood frames for low-rise residential construction, but anything with three or more stories is concrete.

Regarding rural coverage, I've been impressed in the places I've tried. But those places have not been that far from the big cities. The magazine Mobil does a systematic test every year.

What's amazing is that this much offload is happening in a very haphazard way. Imagine what will happen when it becomes easier and the OTT players start to understand the value of exchanges. http://bit.ly/xhT1zL