I've just published the Q2 Update for the Disruptive Analysis WebRTC report, the first edition of which came out in February. That report was the first comprehensive study of the market for WebRTC, spanning telco, enterprise and consumer domains. Having covered WebRTC since Day 1 almost two years ago, my intention is to keep Disruptive Analysis in the position of leading analyst & consulting house in this sector.

The new 29-page update document is available to clients who buy the full report with the optional ongoing subscription, but some highlights are provided here. (Those who bought the standalone report can upgrade to get the updates as well - please contact me for details)

Firstly, I've upgraded most of my forecasts for both device support and expected active usage, as the original numbers looked a bit conservative in the light of recent developments. The speed of emergence of WebRTC in Firefox and Chrome-for-Android has been impressive, in particular. Also, overall smartphone growth is accelerating, while WebRTC support is being enabled by a growing range of API/cloud players as well, which aim to simplify the technology for mobile developers.

Note that Disruptive Analysis' forecasts differ from some others in that estimation of primary browsers is a core step. Many users have multiple browsers installed on PCs or devices, but only use one regularly - a gating factor on realistic addressable WebRTC users for developers. 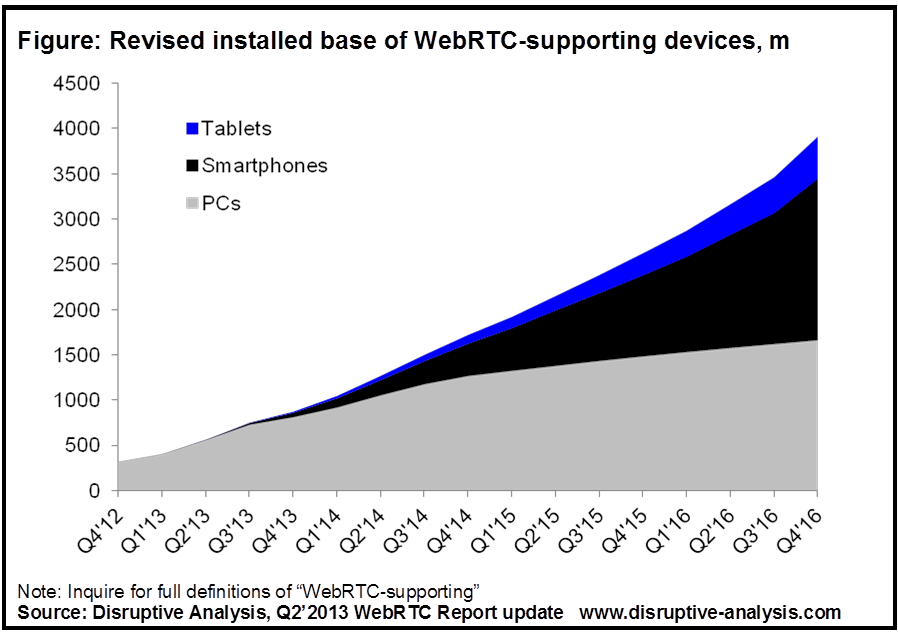 The report update also includes discussion of the fast-evolving, already-crowded market for WebRTC gateways, and the need for vendors to look for differentiation based on specific use-cases or partnerships/ecosystems to stand out. In the last 3 months numerous vendors have announced products and strategies, some aimed at carriers, some at enterprises and others with general platforms. The market is already crowded, and the addition of various open-source alternatives as well as "WebRTC as a service" cloud platforms will make it even harder for generic me-too gateways to gain traction.

In terms of strategic issues, there's an update on what Microsoft's intentions might be, as well as a viewpoint on the VP8 vs. H.264 impasse. My view is that MS is focused mainly on Lync/Skype/XBox integration as a strategic corporate opportunity, but will also start progressively adding support for WebRTC as it gets standardised - perhaps as well as its own CU-RTC-Web proposed alternate version. The video codec situation is messy and has no obvious near-term resolution. It's worth noting that two major H.264 advocates (Apple & Microsoft) are losing both credibility and moral authority with late provision of WebRTC-enabled browsers compared to Chrome and Firefox, which are helping define VP8 as the de facto video codec for web developers irrespective of the "official" standards work.

This highlights the difference between "adding RTC to the Web" vs. "adding Web to RTC" - the former use cases and players move at web-speed, while the latter group tends to be constrained by the pace of traditional comms-business proceses (telco or enterprise). 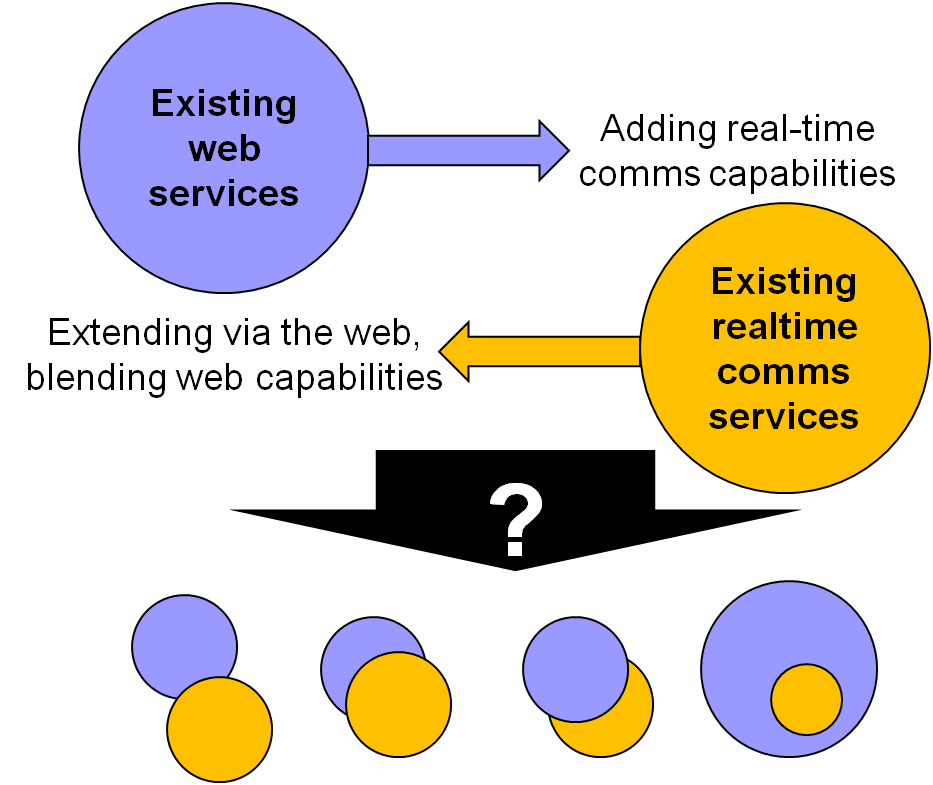 The document also looks at the current real-world use-cases (eg contact centre agents) and predicts the trends over the next 6-12 months. The proliferation of a startups in broad class of cloud/API-enablement players points to a coming rush of consumer-web applications for video-chat or integrated comms in H2'2013. Datachannels support in new browsers suggest innovation in domains like content-sharing and collaboration (including coding for developers). In addition, I'm expecting WebRTC-enabled adverts to be a major part of the future landscape.

Telco use of WebRTC is bubbling under the surface - there's clearly a lot of interest, but I expect it to emerge relatively slowly because of the need for new "furniture" like BSS/OSS and testing solutions. Over-focus on standards will also cost telcos the lead, as I disussed in this recent post. And while IMS-integrated WebRTC is interesting, it is only one of 5 or 10 possible telco use-cases - operators' executives should ensure that numerous departments consider the opportunities for the technology, not just the core/voice network and labs teams which may be too slow and conservative. If necessary, telcos' innovation arms should be prepared to disintermediate their own voice/messaging teams and "BYOWebRTC" instead.

The update also gives quick commentary on about 50 vendor/service players in the WebRTC marketplace, including the addition of 20-30 companies not mentioned in the original report.

If you are interested in purchasing the original main WebRTC report, details are here

For more details on the quarterly update subscription or other WebRTC advisory services, please email/message information AT disruptive-analysis DOT com
Posted by Dean Bubley at 11:29 am