Disruptive Analysis has been covering WebRTC since June 2011. And it is now just past the one-year point since it published the industry's first comprehensive analyst study and forecast covering the entire WebRTC value chain, in February 2013. Comprehensive update documents were issued to subscribers in June & October 2013.

The third revision has now been published, covering recent trends in use-cases, standards evolution and WebRTC industry structure - as well as updated forecasts.

Over the last year, a few other analyst reports have been published on WebRTC. But none has really covered all aspects - enterprise, telecoms, consumer web beyond, with both qualitative and quantitative input. Much of what has emerged has stuck to the original 2011-2012 narrative about WebRTC as being just "like Skype but in the browser", rather than examine how WebRTC is changing into a much broader set of propositions.


In the October 2013 update, Disruptive Analysis identified the trend towards non-browser WebRTC, especially on mobile devices. This has accelerated and is now an undeniable part of the landscape. Indeed, it is the core driver of recent headline service launches, including the consumer-oriented Tuenti and WeCam launches just this week, as well as the B2C customer-service interactions seen in Amazon's Mayday (which is part-WebRTC) and American Express' new iPad app enabled with video-chat.

These developments reflect both positives and negatives about WebRTC's evolution. At one level, there are issues with the lack of IE/Safari support, and continued debate over video codecs. Security and firewall/network middle-box traversal (in some instances) remain issues being addressed by IETF.

But what offsets these problems is the large and growing emphasis on "getting on with it anyway", in pre-standard form, and often using cloud platforms and 3rd-party SDKs to embed WebRTC into mobile apps, standalone PC applications and yes, even plug-ins. This is inevitably slowing down some use-cases, while speeding up others.

This translates into some modestly-lowered forecasts for PC support and adoption of WebRTC in 2014, but increased mobile support, especially from 2015. That is underpinned by both a growing array of "WebRTC cloud enablement" providers such as Tokbox, Twilio, Weemo, Temasys and about a dozen others, as well as a sudden surge in native or browser-based support of WebRTC on Android.

By the end of this year, a large % of new Android devices (phone and tablets) will ship WebRTC-enabled "out of the box" - some in multiple different ways.

In terms of use-cases, the high-profile emergence of Amazon’s Mayday customer-support button on its new Kindle devices has catalysed huge interest in replicating it on other platforms. While only a small proportion of call-centre agents will transition to video initially (mostly for complex high-value customers/products), the economics and business processes will slowly adapt over time. Elsewhere in the enterprise space, WebRTC is cropping up in more UC and conferencing contexts, although as yet, we haven't seen a Mayday-comparable "cheerleader" which moves the market almost overnight, but that may come later this year.

In the consumer space, it seems that mobile/social adoption of WebRTC is finally starting to occur, but primarily on mobile rather than desktop. To a degree this reflects both browser-support issues, but also means that efforts are concentrated around the hot-as-the-sun communications app space. The Viber and Whatsapp acquisitions have just turned the focus on the area that WebRTC was heading towards anyway. Disruptive Analysis expects quite a lot more consumer-centric WebRTC apps to appear this year. It would be unsurprising if at least one "went viral". This could bring 10's or even 100's of millions of users overnight, dragging 1000's more developers in its wake trying to emulate it. There are also interesting desktop uses of WebRTC, including video-chat, but also extending towards defined verticals, such as healthcare and other forms of online consultation.

As predicted, telco use-cases of WebRTC have been slow to become real, especially where network-integration work with IMS is concerned. Although 3GPP is working on standardisation and a number of vendors have announced contracts, it seems likely that “live” commercial services will suffer protracted development, testing and internal-process cycles before launch. Most mobile operators have enough problems simply getting VoLTE to work in normal fashion, and so WebRTC enhancement or extension is not a priority. RCS is another "problem child". 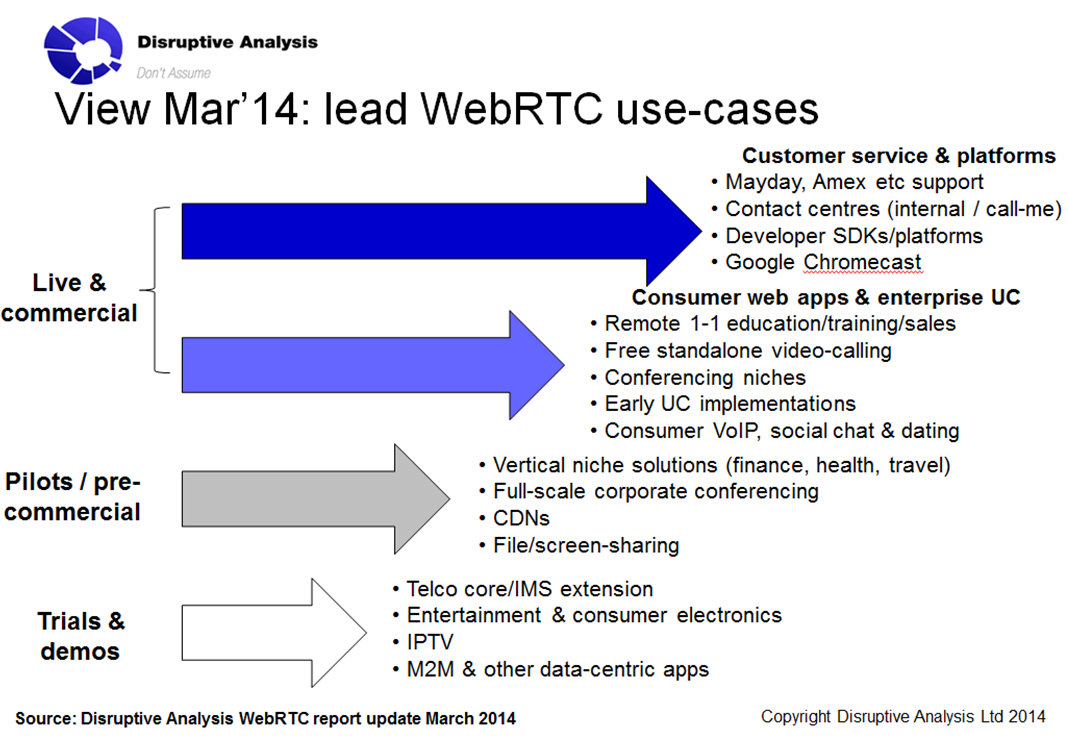 Those telco-related WebRTC efforts which have  emerged into the light of day so far – a total of 4 by Disruptive Analysis’ count – are solidly in the “OTT” camp at present, including developer platforms. That said, there is clear interest from the service provider community, based on announcements, conference and web appearances of telco representatives, and Disruptive Analysis’ own report sales and consulting engagements into that sector. Other service providers from background such as VoIP and web-hosting are starting to appear as well.

As well as the established use-cases, other WebRTC domains such as the data-channel CDNs discussed recently, as well as Google's Chromecast dongle, are also starting to get traction. It seems likely that the overall market will continue to expand in scope as well as scale.

Highlights from the new forecasts: 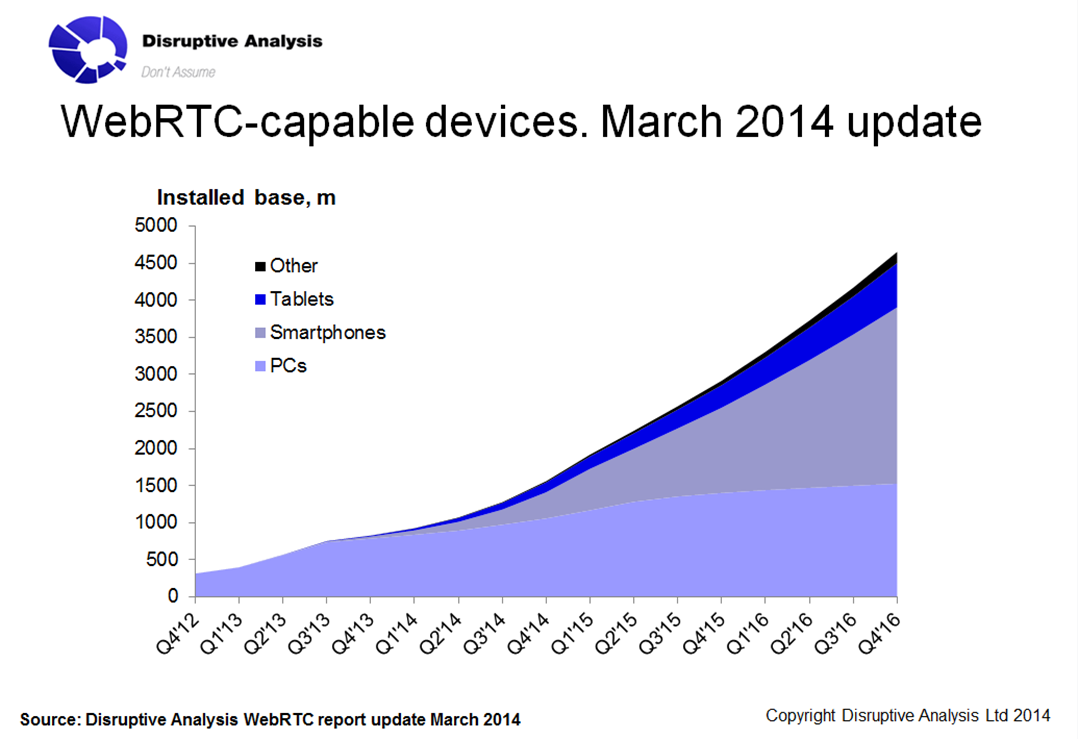 Additional detail and methodology/assumptions is available to the report's subscribers in the full document.

Charts are available for companies wishing to use the data in presentations or marketing material, subject to sourcing to the Disruptive Analysis WebRTC Report.


New customers buying the WebRTC study will receive both the original report and this March 2014 update, plus an hour's conference-call to discuss the current state of the market.

Payments can be made either by card/Paypal online below, or by invoice/bank-transfer. Please inquire via information AT disruptive-analysis DOT com

I am planning to buy your report for personal use/education reasons. Is there an option for 1 license with reduced cost. The report won't be used for any commercial purposes.

Tollfree said...
This comment has been removed by a blog administrator.
11:49 am

PGDMcollegesDelhi.in said...
This comment has been removed by a blog administrator.
9:52 am