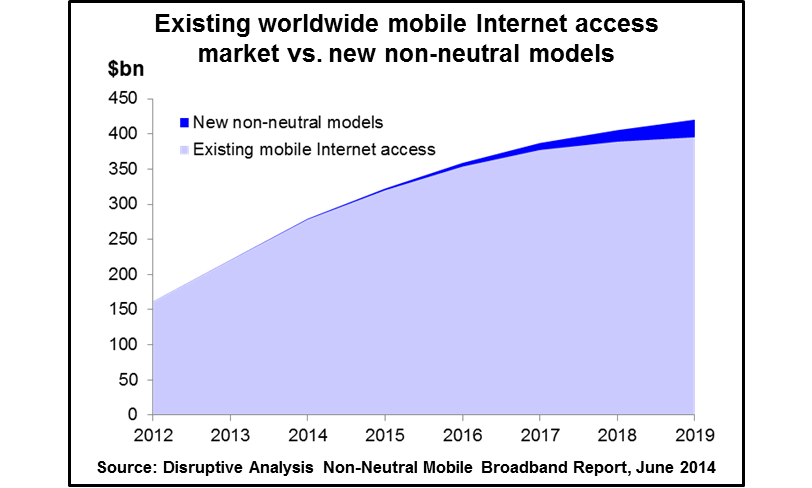 Disruptive Analysis has published a major study into the viability and potential scale of over 25 forms of "non-neutral" mobile broadband & Internet business models, such as "sponsored data", "zero-rated" apps and differential network QoS or "fast lanes".

Many of these approaches are highly controversial, with regulators and law-makers coming under pressure from technology companies, telecoms operators, lobbyists, activists and even political parties. The US FCC, European Commission and other authorities are all considering  future Internet regulation, against a backdrop of hyperbole  and emotive language on all sides.

Much of the discussion and media furore has centred on fixed/cable broadband ISPs, where the huge demand for streaming TV and movie content has tended to polarise discussion.

Many observers have confused peering deals (eg Comcast/Netflix arrangement) with Net Neutrality & prioritisation, even though that is an entirely different & mostly irrelevant issue in this context.

But the mobile industry has very separate dynamics – 3G/4G data use is growing strongly with the adoption of smartphones and tablets, with data-plan revenues also climbing. Mobile apps and browsers are becoming ubiquitous gateways not just to content, but for communications, social media and business communications. The emerging “Internet of Things” is expected to be mobile-centric, again changing the landscape.

And as smartphone penetration trends towards saturation in developed markets, they want to differentiate data-plans on metrics other than raw speed and data-volumes. In the developing world, there is a desire to get lower-spending users onto the first rungs of mobile Internet usage – perhaps with free or more-limited offers – in the hope of future growth.

As a result, mobile operators are hoping that less-rigid "neutrality" rules will allow application-based charging for end-users, or perhaps new revenues from content companies paying for traffic on behalf of users (sponsored data) or for extra QoS. While some countries allow - or even mandate - blocking of certain apps, that is not generally an option in Europe, North America or most other advanced markets.

But a deeper set of questions is being overlooked:
... and the elephant in the room - are any of the non-neutral models actually viable or valuable anyway? Is it actually worth the effort & cost of new equipment, software - and lawyers and lobbyists?
The answer? It may be worthwhile, but only just. Models like sponsored data, QoS-enhanced services and application-based charging might account for just 6% of overall mobile Internet/broadband revenues in 5 years' time. The much-ballyhooed two-sided business models might yield just 2% of overall mobile data revenues.
Some types of non-neutrality are less controversial than others. Some applications are really just about mobile broadband rather than access to the Public Internet. Mobile operators and regulators should focus first on the former - enterprise connections, leading-edge M2M & IoT uses of cellular, public safety data applications and maybe paid data for mobile advertising.

Conversely, so-called "fast lanes" for mobile video or applications are complex to achieve, cause huge controversy and - in the final analysis - likely won't be worth much anyway.

Zero-rating of certain applications is interesting - some say it distorts competition and encourages mobile operators to reduce "general" open-Internet quotas, in favour of revenue-share deals with content players, or gives Facebook or Google too much of a lock over new Internet users. Yet it also does allow access to Wikipedia or educational material for free, and in many cases is just a promotional tool rather than a strategic shift. Disruptive Analysis feels it should be watched closely, but is not yet a major Neutrality risk (although the Chilean regulators recently thought differently, and banned it).
Lobbyists, politicians, telco execs and regulators need to "pick their battles" better.

One of the key themes is that new mobile data and Internet models are much harder to create than fixed non-neutral services. The realities of radio networks, device OS's, content/app consumption and policy/core infrastructure are hugely different and much more complex. Many ideas such as priority-QoS and application-based charging fail the test of "do they work well enough?" 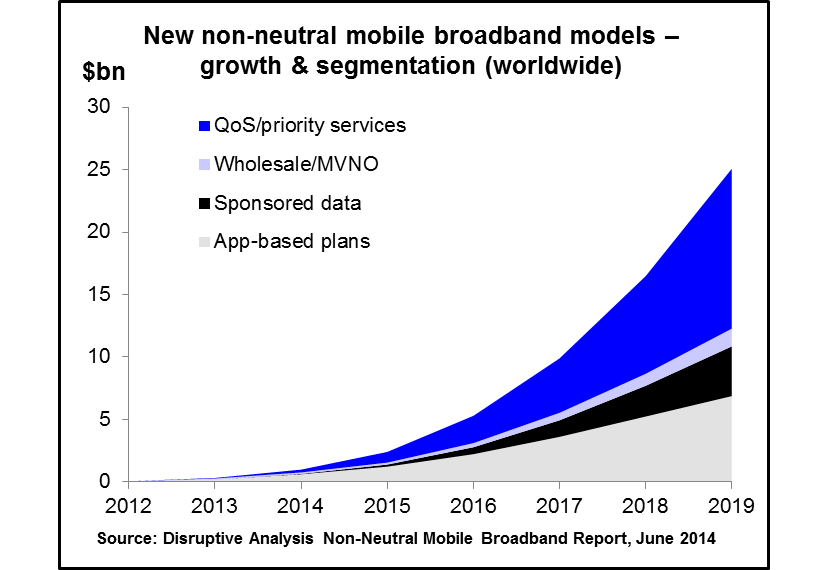 Dean Bubley, Founder of Disruptive Analysis said "Many of the concepts for sponsored-data, mobile QoS and application-based charging sound good on paper for operators, but fail a reality-check. Irrespective of the arguments for and against Net Neutrality, it needs to be recognised that for mobile networks, there is little upside anyway - and indeed, many additional risks and costs"

The report is available for purchase immediately. Details and payment options can be found here or from information AT disruptive-analysis DOT com

Well, it's a tough brief so I am cutting them some slack. It's tough to come up with something interesting enough to announce the mobile section inside all Khoury Home stores so "Watsup Dora" (with no copyright infringement let it be noted)cell phone tracking app