In conjunction with Chris Lewis (Lewis Insight), I've written a fairly provocative white paper for Amdocs, looking at whether the hype about "app-aware networks" and policy management is realistic. It's one of a series aimed at telco CTOs & CMOs, done by different analysts - see here for a link to all of them. A quick intro video is below.

Much current discussion in the network industry concerns topics such as virtualisation, new approaches to monetising data traffic, or the shifting balance-of-power between application providers and infrastructure owners. Despite the furore around Net Neutrality, there continues to be a desire to treat Internet traffic differentially, as well as creating other new non-Internet capabilities in the network, perhaps specific to IoT connectivity or on-net content services.

Although innovations like SDN (software-defined networks) and NFV (network function virtualisation) are being associated with “network slicing” and “application-awareness”, those general concepts have already existed in similar form for some years. Both fixed and mobile networks have sought to offer so-called “value-added” functions, typically through boxes in the data path that discriminate between different flows, alter certain traffic’s paths or content, or add in additional data in some fashion.

Yet there is a growing tension here between stakeholders – and also a disconnect in terms of mutual understanding and terminology. Often, the network attempts to act directly on data and applications transiting it – whether that is in terms of QoS management, assurance and priority (where legally permitted), or more mundane actions such as content-optimisation and filtering. Yet at the same time, the nature of applications is itself evolving fast.

Apps are increasingly-complex amalgams of multiple web and native components; they are able to adapt their behaviour to the network conditions, avoid scrutiny by encryption or obfuscation, and change their nature overnight by merging – or splitting into separate services. The way that an application is perceived by the network may be very different to how it is perceived by a user. Network architects and operations staff do not always look at the situation “through a developer’s eyes”.

These differences do not suggest the hoped-for utopia is realistic, with telecom operators obtaining significant incremental revenues from content or application providers, arising from extra value from network-awareness. Neither does it signify that traffic-management will be able to moderate congestion or balance network loads as much as desired. If anything, it perhaps suggests the opposite, as developers look to circumvent network restrictions or unwanted intervention – for example by ever-greater use of encryption, pushing traffic over 3rd-party WiFi, or by alerting users and regulators to unwanted policy-management actions. Against that backdrop, some of the rhetoric from the telecom industry about so-called “OTT” providers is unhelpful and antagonistic.

Disruptive Analysis is even aware of an incident in which a network operator accidentally degraded one of its own VoIP applications - the app development team and network policy-management team didn't realise what each other were doing.

A new white paper published by Amdocs, and written by Disruptive Analysis and Lewis Insight hopes to shed more light on this dichotomy, and suggests ways to bring together the network operators and their peers in the application space. There certainly are ways to link networks and applications, but they will need much tighter collaboration and a focus on “mutual consent” as a primary goal, rather than monetisation. 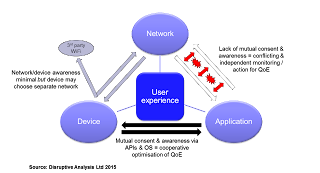 In particular, it is important that CTOs and network architects gain a deeper understanding of how applications are evolving, and the tools at developers’ disposal to help create higher-quality experiences. While the network is important, so are devices – and so also are any business processes involved in optimising performance. The average software developer is dis-incentivised to work more closely with network operators if they face sizeable practical hurdles or costs, for little extra provable benefit.

One important priority should be for networks to focus on providing some sort of information and status feed to applications. If developers can see that there is current or possible congestion or other problems, they can tune applications so that they mitigate the issues, rather than exacerbate them. It may be easier for the network to offer a “weather forecast” to application and content providers, rather than trying to control the rain and sun.

The App-Aware Networks & Network-Savvy Apps white paper is one of a series published by Amdocs + Lewis Insight on network-related thought leadership, written by a range of independent analysts & specialists. The paper can be downloaded here, along with video clips and summaries of the other papers in the series.